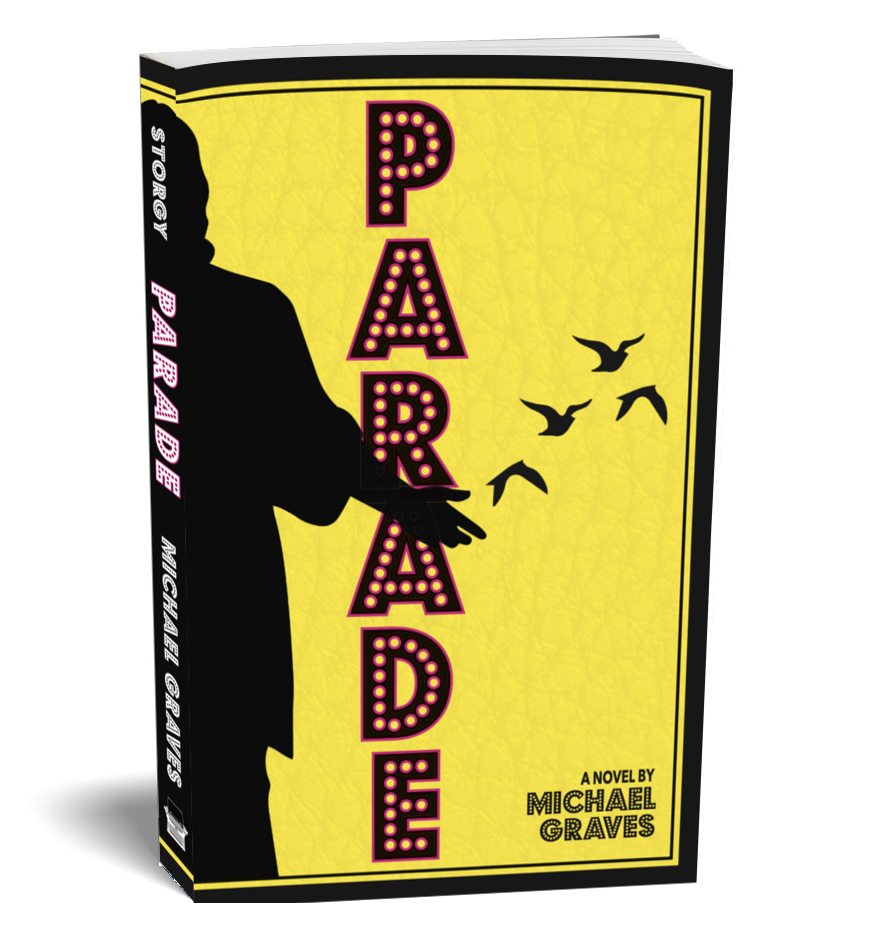 Reggie Lauderdale suffers from a crisis of faith. His cousin, Elmer Mott, dreams of becoming their hometown mayor. Both boys are stuck in suburbia trying to be adults… but they aren’t sure how to be themselves yet. When a twist of fate sends them fleeing in a stolen limousine, the cousins escape to Florida where they meet a retired televangelist, who inspires them on a path of glitzy sermons and late-night parties. But are the celebrations sincere or deceptive? And who is keeping tabs? Who is watching?

Parade is a tour-de-force, comic tale of religion and government.

An interview with Michael discussing Parade

Parade has an official Spotify playlist

“With boyish exuberance and sparkling dialogue, Michael Graves delivers a deliciously queer tale that’s part coming of age and part buddy flick. Elmer’s and Reggie’s adventures in their search for home is full of surprises.”

“Parade is a wild ride of self-discovery, featuring a hugely diverse cast of likeable misfits and oddballs. Michael Graves sketches the human experience with an unflinching eye and real heart. A vibrant coming-of-age tale pulsing with raw humanity.”

“Parade is unapologetically brilliant, told with a dark, raw and refreshing lyricism that makes for a totally beguiling tale, a story that Truman Capote or Hubert Selby Jr would be proud of penning.”

“Parade is one jigger Capote’s Answered Prayers, a jigger of Tennessee Williams’s story ‘Two on a Party,’ and a generous pour of Michael Graves’s tenderly transgressive yet never abrasive tonic of satire and sweetness, all of it going down bracingly, not bitter. It is a story of callow youth contrasted with the tough and ultimately ruefully true choices that adulthood tries to force us into. In the author’s hands the narrative of rite of passage and religious hypocrisy goes down unsettlingly, which is the mark of the mixer’s skilful hand.”

“A delightfully lyrical and endearing coming-of-age story with characters that stay with the reader long after finishing the novel. Graves writes with an unapologetic and unflinching depth that delivers the narrative goods.”

– Anthony Self, Author of Birthday Treat

“Parade is a riotous story of friendship and faith. Michael Graves’ debut novel is Roddy Doyle meets Hubert Selby Jr; told with great humor, compassion and a unique insight into the darkest corners of the human condition. Through the characters of Reggie, Elmer, and a tremendous supporting cast of misfits and oddballs, Graves takes us on a road trip across an America struggling to find its new identity, while two young men go in search of theirs. Above all, this is a book that reminds us of how vitally important it is, now more than ever, to hope for something better and to try our hardest to get there.”

– Rick White, Author of Talking to Ghosts at Parties

“Parade is a pop lit gem. With neon prose, Graves weaves a tale of two heroes, Reggie and Elmer, who are trying to sort out the mess that is America. Government, religion, civic responsibility, general kindness. The lessons in Parade might just be the answer.”

“Michael Graves is one of those super rare storytellers who is magically able to write with wisdom, poignancy, and dark wit. Parade is a joy to read – it plums the troubles, foibles, and disconnects of our world in an incredibly timely and wonderfully timeless way that’s hilarious, steely-eyed, and hopeful.”

– John Jodzio, Author of Knockout and If You Lived Here You’d Already Be Home