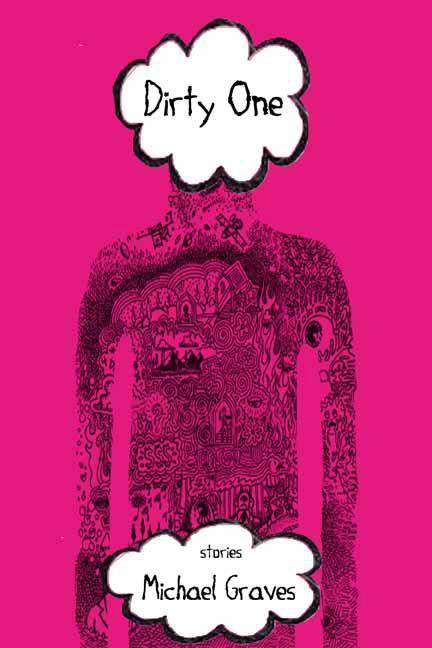 A Debut Collection of Stories

Set in the 1980’s, Dirty One follows a pack of adolescent characters who live in the acid-drenched, suburban town known as Leominster, Massachusetts—the plastics capital of America, as well as the birthplace of Johnny Appleseed.

In the story, “From Kissing,” a sixth-grader named Butch has his first homosexual tongue kiss during a monster truck show and, after a bout of the flu, he is convinced he has somehow contracted AIDS.

With “Curls and Curls,” nine-year-old Lee hates his kinky, brown head of hair and is seemingly possessed with magic, casting spells to unfurl his evil tresses.

In “A Snow Day,” eleven-year-old Cassidy longs to be the next mega-watt, teen pop star, but is forced to deal with her crazy classmates, her gay father, and her dog that continually vomits in the driveway.

“Do It” follows a tween named Denise as she seeks her first sexual experience with a boyfriend who can never remain erect. Denise strives for high school greatness while her gay best friend is crowned king of all local paper routes.

These selections join five more, constructing the remarkable world of Dirty One.

Buy Dirty One at Amazon

Interview with Michael discussing Dirty One at Lambda Literary

Praise for Dirty One

“Dirty One is wild, heartbroken, funny, and fresh. Michael Graves writes like the heir to George Saunders and A.M. Homes, but he breaks them down, turns them inside out, and makes them all his own.”

“Dirty One has all the snap and crackle of pop culture, but with the dark wisdom of something much deeper. With a voice both glossy and gritty, both sissified and sharp as steel, Michael Graves sounds like no one but himself.”

“Dirty One is a searing, single-sitting read. Michael Graves employs a masterfully minimalist prose style that gives each of these stories the razor-sharp edge of brutal, unapologetic poetry.”

“The beauty of Michael Graves’ Dirty One is an American beauty, one where the discarded, the marginalized, and the rejected are the most important things—where the Dirty One is, when we look at him honestly, through Graves’ clear and clearing prose, beneath all those curls and curls, the Handsome One.”

—Brian Bouldrey, author of Love, the Magician and Honorable Bandit: A Walk Across Corsica

“Graves explores that line between childhood and adulthood, pinpoints the way we linger there without even noticing it… Graves characters are outrageous drug fueled, sex crazed, self-centered teenagers. Whereas everyone in the eighties (or writing of the eighties) focused on dirty realism or America’s golden age of padded shoulders, Graves’s world is refreshingly queer and odd and fun.”

“The young adults that populate Graves’ fiction are skewed, skittering through their adolescence with a drug- and demon-fueled intensity that leaves the reader breathless and aching to sit down with these poor kids to let them know that things do, indeed, get better. Still, the kids are only following the examples of their even more fucked up parents, most of whom have no business having kids in the first place. But the drama… The drama is delicious and makes for some of the finest reading I’ve had in months. Graves is one of the most original young voices writing for our community today—so pick up a copy of Dirty One and you can tell your friends that you were a fan from the beginning.”

—Jerry Wheeler, Out in Print

“As debuts go, they don’t get much better than this. Graves, a child of the ’80s, draws diligently on the banal pop culture totems of his adolescence—cassette tapes, pastel recliners, roller rinks, Walkmans, Mario Lopez in Tiger Beat. His characters, however, are far from banal. They are antsy, angsty kids, some in their teens, some younger, consumed by jarring desires they can’t resist but don’t quite comprehend, anxious to shed their everyday skins but with barely any sense of the world beyond their suburban existence. And, boy, do they transgress. These stories brand Graves as a next-generation master of prose that is at once remorseless and refreshing.”

“A nostalgic saga of pre-teen drama. It’s like a Wham video with a polymorphous perverse underbelly and a Flock of Seagulls hairdo.”

“A city of mostly white, working class people is seen from a gay perspective in Michael Graves’s poetic short stories from Chelsea Station Edition’s Dirty One,which is also more of a literary outing than a porn romp. Leominster Massachusetts, near Worcester in the mid-part of the state, has played a more significant role in the establishment and progress of plastics than any other city in the United States, which factoid gives a kind of ironic contrast to the blue-collar nature of the place. Set in the 1980s, the stories follow the misadventures of some children and adolescents who are living in the acid drenched community. For example, a 6th grader named Butch has his first homosexual tongue kiss (“From Kissing”) and when a bout of the flu follows, he is convinced he’s contracted AIDS. A budding Truman Capote in his poignant portraiture of misfit children and teens, Graves is a talent to monitor.”

“Reminiscent of Dennis Cooper and Bret Easton Ellis, the antic language of these stories belies a larger, subtly unfolding interiority of sublime horrors. Desperation and an almost willful naïveté color each story, and throughout Graves’ lilting prose produces a welcomed hyper-focused verve in his characters—a sort of sissy magical realism.”

“Dirty One is a quick read that hits hard. Graves tells his tales in a punchy, dialogue-driven style that keeps the pages turning, even through the direst scenarios.”

“Set in industrial Leominster, Mass. during the 1980s, Graves’ dark (and sometimes drug-fueled) stories capture pivotal moments from the cusp of adolescence. His prose, at once fun and sophisticated, makes for a quick and compelling read.”

“It’s the very darkness inside ourselves that Graves shines a light on in his partially funny, partially devastating, wholly honest collection.”